Getting Closer, But Still So Far Away from Basic Proficiency in K-12

Ideally, all students attending our K-12 system attain the requisite skills in Math and English Language Arts (ELA) to advance to higher education or technical schools, or secure an entry level job upon graduation.  Looking at the latest results from the 2019 Smarter Balanced assessments, progress is being made in our region toward that ideal, but it is modest and still falls far short.

This year marked the fifth year of Smarter Balanced testing in grades 3 through 8 and 11.  The tests were designed by the Smarter Balanced Assessment Consortium, based upon the Common Core State Standards.  While no standardized test is perfect, these assessments are generally well regarded in the education community and enable stakeholders to, as the analogy goes, compare apples and oranges across the state in terms of how well students are learning the fundamentals.

In English Language Arts, the percentage of students that met or exceeded the standard has increased since testing commenced in 2015 at the state and county level, as well as in LAUSD, charter and traditional schools combined (chart below).

The most significant improvement was in LAUSD, which increased the percentage of students meeting or exceeding the standard by 11 percent since 2015.  Countywide, students who met or exceeded standards increased by 8 percentage points, an average of 1.6 percent annually. 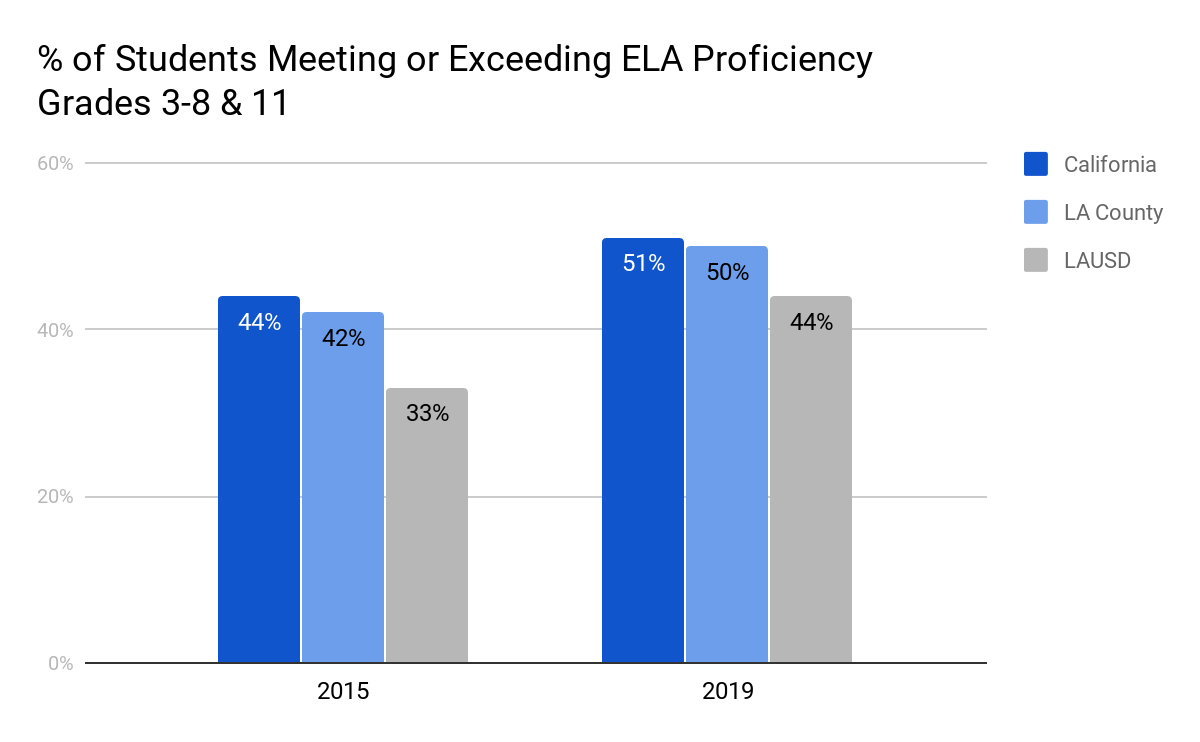 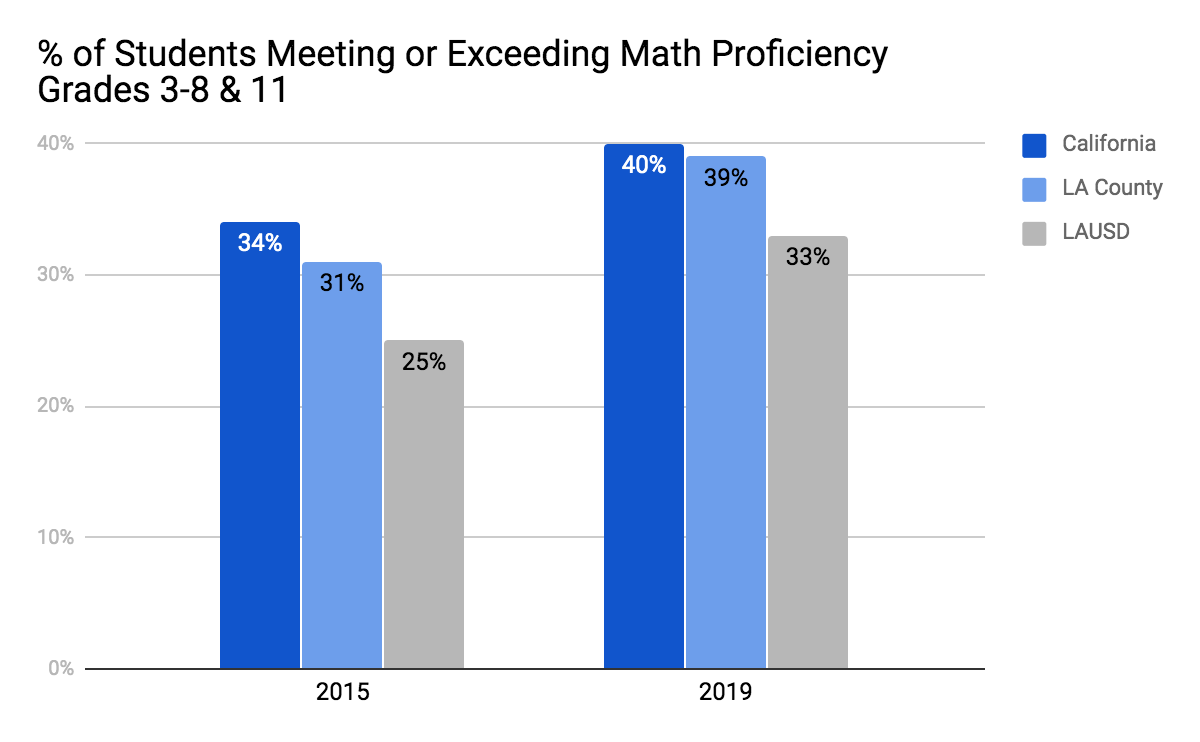 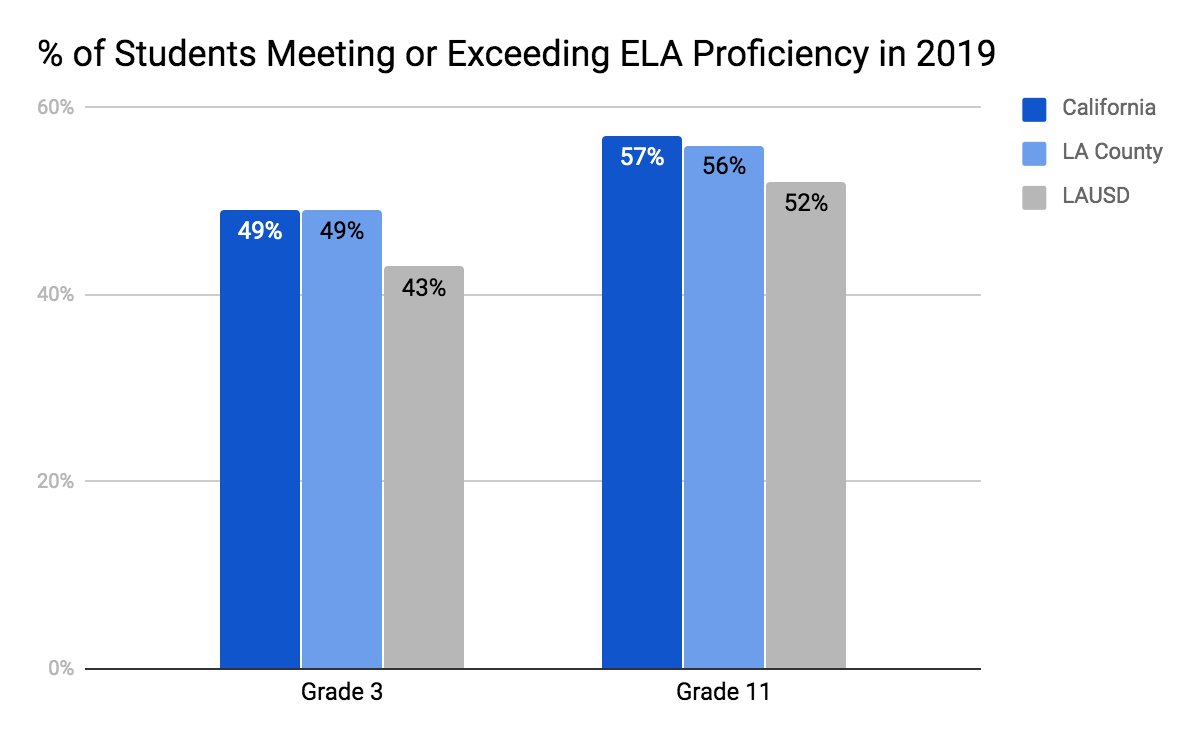 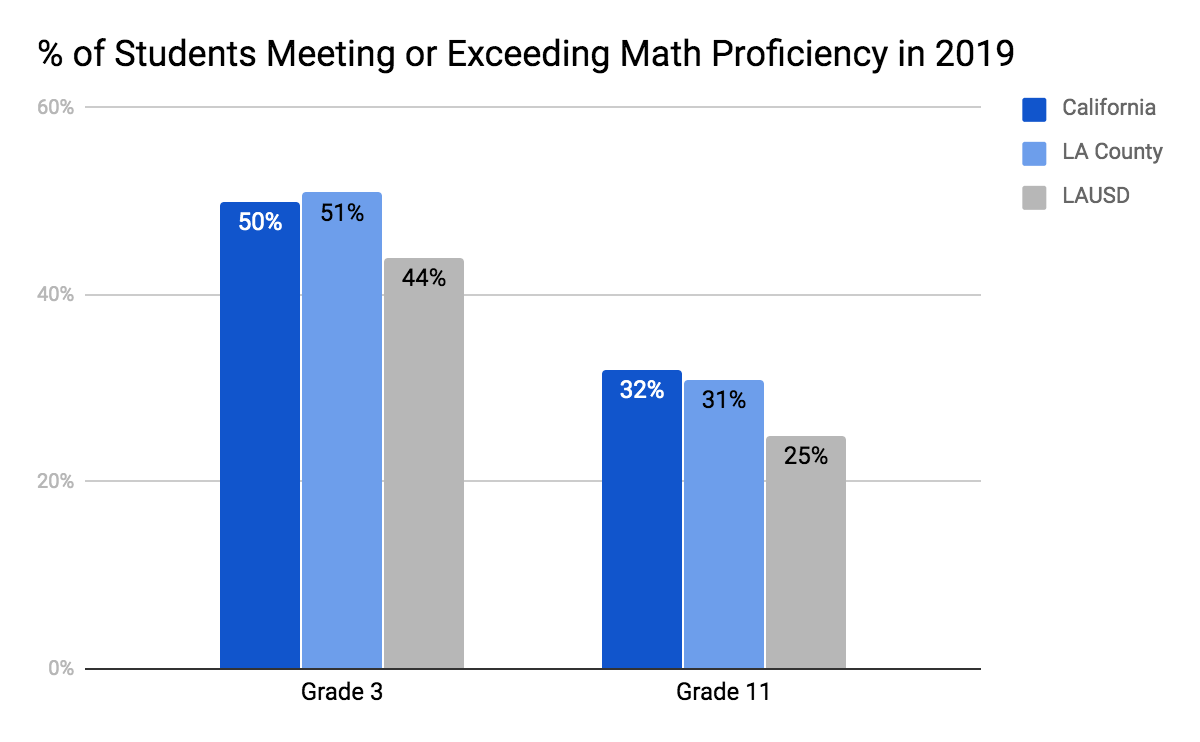 The latter trend is alarming, particularly when STEM related occupations at the national and local level are the occupations set to grow the most on a percentage basis, e.g. technology related positions, data scientists, health professionals, etc.

Progress is always positive, except when it does not keep up with large macro trends that require it to proceed at a faster pace.  As it stands today, just half of LA County students are proficient in ELA and less than 40 percent are proficient in math. These basic proficiencies will become more important as automation becomes more apparent in the economy in the years to come.  Routine jobs will continue to disappear and will be replaced with those that require not just these basic skills, but also logical thinking and problem solving skills, social and emotional skills, and creativity. Furthermore, for LA to be attractive to high wage industries such as in Biopharmaceuticals and Information Technology, a skilled workforce is necessary.  Our K-12 pipeline, while improving, is still falling short of its potential.

A critical component of the solution will be attracting, training, and retaining strong teachers in the K-12 system.  The Public Policy Institute of California found that implementation of Common Core standards across the state has been uneven, which is likely a key reason why progress has not been faster.  Stronger implementation with teacher training as an essential component will be key for improvement.

Starting this year, the California Department of Education began administering the California Science Test (CAST), which will assess student proficiency in science in alignment with the Next Generation Science Standards (NGSS).  The first set of results will be available in 2020. Those results will be evaluated to determine the impact our NGSS Teacher Training initiative has on students. It is one of many efforts our region will need to advance to prepare Angelinos for the jobs of the future.